We are PUMPED to introduce a new camp to the 4th-7th grade age group this summer!  After lengthy consideration, we decided to retire our much loved “Deep Space Robotics & Rocketry” camp.   We will really miss those Family Day rocket launches, though!  Taking that open spot on our camp lineup is the new Advanced Robotics with Lego EV3 camp. 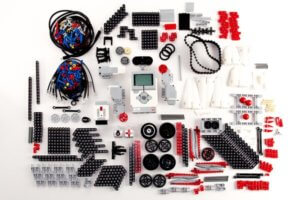 Our “Deep Space Robotics” curriculum was based on the second generation Lego Mindstorm NXT kits, which are great tools, but were originally released in 2006.  You can imagine the differences in technology between now and then- we were all still lugging around flip phones back then!  On the other hand, the new Advanced Robotics EV3 camp uses the newest 4th generation Mindstorm EV3 kits! One major difference is that Advanced Robotics EV3 campers can now program their robot’s commands directly onto the new “Intelligent Brick.” Past Mindstorm kits required the camper to program their robot from a computer and then run the application on the robot, so this is a HUGE timesaver!   Check out this awesome video that shows off some of the cool things the EV3 robot can do.

So what does a camper do all week in Advanced Robotics camp?  First, they begin by familiarizing themselves with the

equipment, software, and brick; and are challenged to build the base robot with their team.  Once they’ve learned their way around the set, now the fun begins! Campers will program their robot to go forward & backward, turn a number of degrees, follow a line, sense colors, complete a maze, do some dance moves, and a host of other fun skills!  The week wraps up with plenty of free build time, and then campers showcase their awesome robots to their parents during Family Day on Friday. Somewhere in there, campers also find time to build a separate Lego robot that they’ll get to take home with them on Friday.

By the end of the week, our Advanced Robotics campers will be so proud of their new programming skills- as they should be!  They will have worked through building, testing, troubleshooting, and revising the design of their robots.  They’ve also polished all of their interpersonal skills (can we say communication, perseverance, and patience?).  The skills learned in this camp will translate to all areas of life, and hopefully it will even spark a lifetime love of programming!