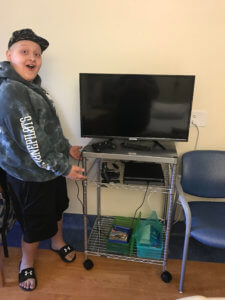 Club SciKidz Dallas is pleased to announce that a new camper scholarship fund has been established for the 2020 camp season in memory of a very special young man, MJ Graves.  The MJ Graves Scholarship will be awarded to one camper each year who displays a spirit of generosity and an interest in video gaming.

MJ was diagnosed with Ewing’s Sarcoma, a rare bone and soft tissue cancer, in February 2018, just before his 13th birthday. Over the next 11 months, he spent often up to 50% of his life in the hospital, either getting treatment to try to cure the cancer, or combatting the side effects of treatment. He was often confined to a bed during that time, and even when home and as healthy as he could be, school wasn’t an option because of the risk of sickness. Luckily MJ had a great passion for playing games on his Xbox One or gaming PC, which allowed him to socialize with his friends from home.

Unfortunately, when in the hospital, there was little or no access to gaming systems, and there was too much free time with nothing to do. MJ’s parents put out the word on social media that they could really use some used systems to donate to the hospital. Within one or two days someone donated four rolling carts complete with two PlayStation 4s and two Xbox Ones – with games and rechargeable controllers. It was a life changer for MJ and the other kids stuck in the hospital! And so began MJ’s quest to fill the hospital with entertainment (toys, games, etc.) for kids. Over the next few months, MJ helped coordinate donations of cartloads of games, movies, toys.

A few months into treatment, MJ learned he would be granted a “Make a Wish.” He could meet someone famous, go anywhere in the world, be someone special for the day, or whatever else he could dream up. He and his parents discussed what he might like to do, and one idea was to start a foundation with his Wish, to help other kids like him. The months passed and MJ never made a decision about what he wanted for his Wish. When he learned in January 2019 that he only had weeks to live, he knew he wanted 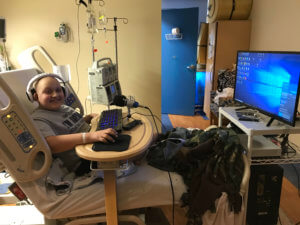 to use his Wish to start Ready Fighter One, a charitable foundation that brings toys, games, gifts, and anything else to kids fighting cancer to try to make their hospital stays a little easier. In his last few days, MJ was asked if he had a message he wanted to share with all of his friends. Without hesitation he said, “Savor every moment.” Sadly, MJ passed away on January 11, 2019, but his legacy of generosity will never be forgotten.

Our hope is that MJ’s legacy of generosity and love of gaming will be carried on by a camper each year.  Please visit https://readyfighterone.com/ or follow them on Facebook for updates @readyfighterone.  Click HERE to complete the scholarship application- all paperwork must be submitted by March 1, 2020!