If you purchased a LEGO® MINDSTORMS set for your young child over the recent holiday season, you’ve done well – even if you aren’t entirely sure what the thing actually does!

It may sound hard to believe (especially if you grew up playing with LEGO bricks that – *gasp* – were just simple pieces of plastic), but MINDSTORMS sets actually allow your kiddo to build, program, and use their very own robot.

The best part? Your child will be so busy enjoying their cool new gadget that they won’t even realize how much they’re learning while using it. While physically building their new robot toy, your child will get an introductory crash course in basic engineering. Once they’ve built their new gadget, they’ll then learn some of the basics of computer programming (and even some coding, if they’re ready). Throughout these processes, your child will also strengthen their ability to follow instructions and persevere through trouble spots, and will also have a number of opportunities to think creatively, as well.

While you will likely want to take a backseat and allow your child to take the reins throughout the experience, you should also have a basic understanding of the overall stages of the robot-building process, too. In turn, this will allow you to guide your child if they face any trouble spots throughout the process.

So, without further ado, let’s take a look at the four main stages of creating a LEGO MINDSTORMS Robot.

The Stages of Creating LEGO MINDSTORMS

As you can probably guess, creating a robot (even a toy one) is a rather involved process. While we won’t get into the nitty-gritty details of development, we’ll outline the basic steps your child will take while building their first robotic MINDSTORMS toy.

This first step will likely be familiar to those of us who grew up with plain ol’ inanimate LEGO bricks (poor us, right?).

Essentially, the first thing your child will need to do is actually build the physical frame of the robot. MINDSTORMS comes with explicit instructions for doing so (these instructions can also be found on the website, as well). While your child can eventually get a bit more creative with the building of their robot, for now we advise they follow the directions as closely as possible.

As they build the robot’s frame, they’ll need to also connect circuits and cables along the way. Obviously, these steps are vital, as these connections are necessary for making the robot run as planned later on.

Once your child has physically put together the robot, they’re ready for the next step.

Here’s where things get technical.

However, neither you or your child need be intimidated by the prospect of programming the MINDSTORMS robot. LEGO has you covered. To introduce your child to the world of programming, LEGO offers a number of videos on their website that explain everything they need to know to get started.

Once your child has watched and understood these introductory videos, they can then use LEGO Company’s EV3 Programmer app or program (depending on whether they’re using a tablet or computer) to get started programming their robot.

Again, while it might sound complicated at first, you need not worry. EV3 Programmer doesn’t require your child to input text-based code; rather, the user interface offers a visual representation of the program being created. 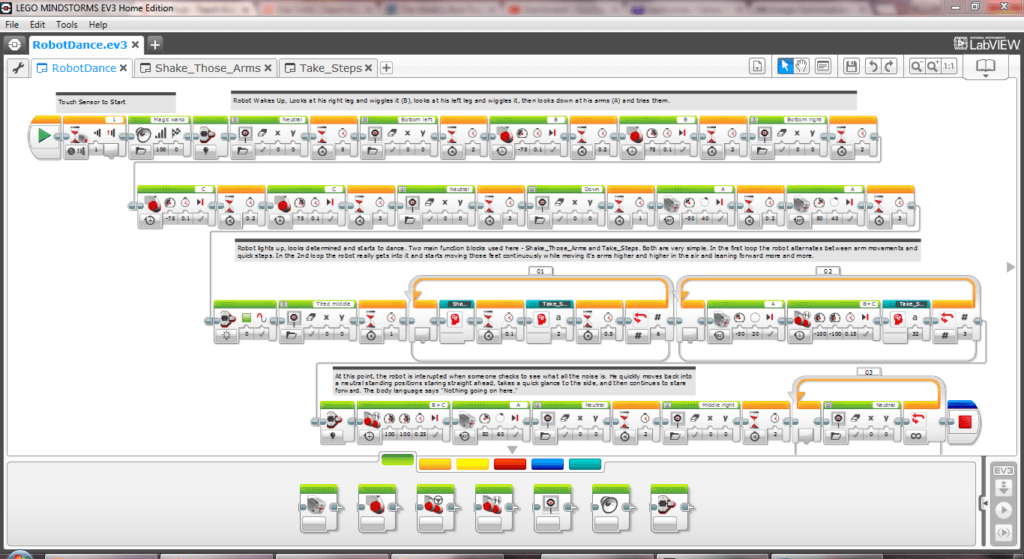 Essentially, your child can program their robot to perform a sequence of actions by dragging and dropping command buttons accordingly within the program. In doing so, they’ll learn the basic functions of coding (e.g., opening and closing sequences, hierarchies, etc.) without having to actually learn a convoluted programming language.

(However, as they become more familiar with the coding process, they can use a variety of third-party languages – such as Python – to create their own programs for their robot.)

Once they’ve programmed their robot to do their bidding (muahahaha!), they’ll be ready to test it out!

Using and Troubleshooting the Robot

Finally, after all this work, your child can take their robot for a test drive. Using the Robot Commander app, your kiddo can direct their toy to complete tasks according to their programming.

Now, there’s a chance that the robot won’t function exactly as planned – and that’s okay. As any engineer or programmer knows, Murphy’s Law will almost certainly come into play at some point while completing a project. As we mentioned before, this is where your child’s perseverance comes in handy.

If your child’s robot isn’t working properly, work with them to go through each step of both the building and programming processes to ensure they were completed accurately. A disconnection, an open loop, or a missing command is all it may take for the robot to not function at all, so it’s important that your child understands the importance of checking every step carefully.

It may be a bit tedious, but when you consider the reward for all this hard work is a functioning robot, it’s easy to say it’s totally worth it!

If your kiddo has really gotten into the worlds of engineering and programming after their initial experience with MINDSTORMS, they’ll love our Deep Space Robotics camp coming up this summer. During this week-long camp, your child will learn more about robotics, coding, and more while working to complete exciting “missions” our staff has created for them.

Registration has already opened for the summer, so make sure you get your child signed up and ready to head to the final frontier!